Also filed in Pariah, Press & Praise | | Comments Off on Entertainment Weekly on Me, Pariah & Some of My Favorite Contemporary Horror Writers

Also filed in Pariah, zombies | | Comments Off on BEHOLD! MANNA FROM… HELL!!!

Usually when I look at my old art I don’t like it (kid stuff not included; that, I love). But I was just going through my flat file, purging some stuff, and came across this cover I did for the Village Voice Literary Supplement. It had to do with the Salman Rushdie fracas (it’s from 1989). Anyway, maybe because I did it in a different style it’s like the work of someone else and I can be a little more objective. I think it’s pretty good.

Also filed in Art, Miscellaneous | | Comments Off on Oldie But Rushdie

I just learned that an old friend of mine died last week.

In the late ’80s/early ’90s, David Aaron Clark was an editor of mine at Screw. I wrote my comics review column, “Panel Debasement,â€ for him (the one that a few posts ago I lamented having writtenâ€”or at least the way I wrote it). My friend John Walshâ€”who at the time was also an editor at Screwâ€”suggested I write the column in the first place, but for whatever reasonâ€”conflict of interest? No, that sounds too professionalâ€”he passed along the actual editing to Dave. Dave and John had a funny working relationship/friendship. Very prickly; lots of insults and verbal sparring.

When Dave first arrived at Screw he was just a portly nerd whose path had led him there. He’d had loftier literary/journalistic ambitions, but such is life. He dressed in jeans and sweaters and was clean-shaven. He found a groove at Screw and fit in. He was a funny guy, but dry of wit. Very dry. Walsh’s humor was broader and he scored laughs easily. Dave’s humor kind of snuck up on you.

Dave and I hung out fairly often in those days. But he metamorphosed during that time period. The sweaters and jeans were replaced by leather pants, full-sleeve tattoos, elaborate facial hair and big leather dusters and cowboy hats. All black. His personal life was often tumultuous and took an irreversibly dark turn with the suicide of Jean, his then girlfriend and band mate (he had a band called the False Virgins). This forever altered him (as such an event would do to anyone with a pulse). Dave always seemed in conflict with his lapsedâ€”but never curedâ€”Catholicism. Though a self-professed agnostic, he took to sporting a large crucifix pendant. Guilt was a big theme with him and after Jean’s death he started a course of both personal and public atonement.

He started performing S&M rituals in videos and onstage. He’d be cut up and pissed on. Later on it provided darkly comic fodder for my cartoon version of him, but at the time and in reality it was disturbing and I wanted nothing to do with it. He often mocked me for my “cloistered” and “safe” approach to life. His humor became more acid. When one goes from being a spectator of porn to a participant, it’s a slippery slope. After some ugly tabloid incidents in his personal life he left Screw and headed west to pursue creating porn full time. We lost touch, though on occasion we’d run into each other. Last I saw him in the flesh was at the San Diego Comic Con. I wasn’t sure why he was there, but I suspect that you could take the boy away from the geek, but you couldn’t remove the geek from the boy. He still liked comics, etc. I hadn’t seen him since before I’d started Minimum Wage and I wasn’t sure if he’d seen it. He had and he told me he thought it was “brilliant.â€ His word. But it meant a lot to me to have his blessing.

I tried many times over the years to reconnect with Dave, via the Internet. We sometimes would start a correspondence but it always derailed almost immediately. I think maybe my life was just a little too prosaic for him. He’d chosen his path and the two didn’t overlap, even via email. About two months ago I tried again on Facebook. I wrote him and he wrote back and not much was said and that was it.

He was 49. He was never a likely candidate for the Old Pornographers’ Home, but still.

Here’s a drawing I did recently of my acquaintance, the writer David Rakoff. His books are great (as are his articles, should you happen across his byline in some tony periodical). 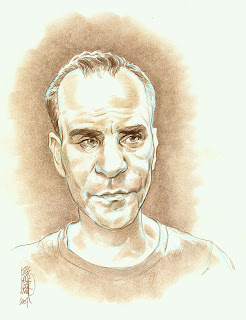 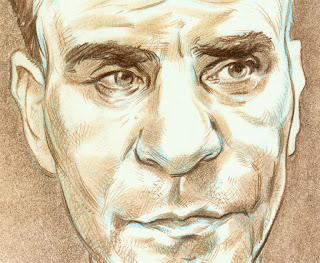