no images were found

Also filed in | | Comments Off on Dot Dans L’Enfer

Also filed in | | Comments Off on Anthony Bourdain: The Hunger Tour 2016

After a nearly 15-year gap, my comic series Minimum Wage returns with all-new issues in January 2014, from Image Comics! Working on the Maximum Minimum Wage collection really renewed my desire to continue the story, and fortunately Image felt the same way. So, starting in January it returns as a monthly title, running for six-issue “seasons,” with gaps between for me to get the next batch going. It’s very much like television scheduling and makes a lot of sense when you’re a one-man band, like I am. Unlike its original run, which came out sort of sporadically, now fans can count on a regular schedule and get a monthly fix of Rob and the gang. New characters, new situations, all very exciting. Stay tuned. But in the meanwhile, here’s some sweet press from USA Today, Bleeding Cool, Multiversity Comics, CBR and Newsarama.

Also filed in Comics, Minimum Wage | | Comments Off on MINIMUM WAGE RETURNS IN 2014

Howdy. I’ve been asked to do one of Reddit’s ASK ME ANYTHING events on Wednesday, February 13th, from 7 – 9PM EST. So, please post questions there and I’ll answer them, within reason. Or without reason. It’s my call. Just do it and keep me from twiddling my thumbs idly.

Q&A on My Bookish Ways

Pariah leads the pack in this seasonal zombie roundup in the 11/5/2010 issue of Entertainment Weekly! I also have a story in The Living Dead 2, so hooray!

It’s kind of a big deal to get a starred review from PW, so I’m pretty thrilled.

Also filed in Authors, Pariah | | Comments Off on Entertainment Weekly on Me, Pariah & Some of My Favorite Contemporary Horror Writers

PARIAH is FANGORIA’S ‘BOOK OF THE MONTH’ selection!

Fangoria bestows their Book of the Month honor to Pariah! I am thrilled. Back in 2007 they also awarded Bottomfeeder the same honor, so I’m two for two. I loves me some Fango!

Also filed in Pariah | | Comments Off on PARIAH is FANGORIA’S ‘BOOK OF THE MONTH’ selection!

Michigan-based Jim Hall interviewed me for his web/cable show, Cult Pop. We talked about recent work like Pariah and From the Ashes, as well as (sigh) my salad days working for Cracked (the magazine, not the new, improved, actually funny website). Jim concept is interesting. Via speaker-phone, Jim interviewed me from his studio, while my end of the conversation was recorded on video in my studio. His director/editor, Jerry Jesion, then put ’em together in post. Very low-tech satellite interview style. Check out his archive in the drop-down menu to see interviews with other creators.

Also filed in | | Comments Off on Cult Pop Video Interview

I am thrilled to be featured, along with ace cover designer, Peter Lutjen, on James Morrison’s fantastic blog, Caustic Cover Critic. I’ve long featured a link here (and hopefully some of you have taken a gander). It’s a wonderful site filled with great and terrible cover art, exhaustively detailed. It’s great. Check out the interview with Peter and me.

Also filed in | | Comments Off on Caustic Cover Critic

FROM THE ASHES Playlist

Oops. I neglected to post this link to a playlist of tunes that either accompanied me as I drew or fueled my process in creating FROM THE ASHES. I was invited to contribute it to the fun blog Largehearted Boy’s ongoing Book Notes series in which authors share their musical inspirations. Check it out.

I spoke with Ken Rodriguez and Justin Paine on their free-form podcast Milk of Minutia. Download and enjoy as we discuss From the Ashes, Pariah and some of my more questionable earlier efforts.

Bob on WTF with Marc Maron!

I have known, on and off (though mostly off), the brilliant comedian Marc Maron since 1999. Prior to our actual meeting I had been aware of him because I’d enjoyed him as host of Comedy Central’s (or was it still the Comedy Channel at that point?) Short Attention Span Theater. He had a febrile intelligence that popped off the screen. I enjoyed his stand-up specials and whenever I’d see him turn up as a guest on talk shows.

I then saw him in Jonah Kaplan‘s very funny short film Stalker Guilt Syndrome. I’d met Jonah through our mutual friend Dean Haspiel and told him how much I enjoyed the short, particularly Maron’s performance. Shortly after that I was having dinner at Olive Tree (not fucking Olive Garden, thank you very much), my favorite eatery downtown. Downstairs at Olive Tree, is the Comedy Cellar, an intimate spot to see stand-up. I spotted Maron seated at the table in the back where the comics who perform get their meals, so I introduced myself, telling him I’d just seen the short. Maron kind of frowned and said something like, “Oh yeah? Whudja think of it?” I told him I’d enjoyed it very much. I even got a copy from Jonah to add to my video library.

I guess Marc felt comfortable that I wasn’t going to stalk him (with or without guilt) because we exchanged info and started getting together from time to time. When I mentioned my burgeoning friendship with Marc to Jonah he said, “Yeah, good luck with that.” Hmmm.

In Marc’s company I got to know some of the ins and outs of the business of stand-up. I’d always been a fan of good stand-up but was now getting an inside look at how tough a career it was. I respected him and the craft even more. Marc was workshopping a one-man show back then (The Jerusalem Syndrome, which also became a great book). Michele and I attended several versions of it at The Westbeth Theater downtown. I think I was always the loudest laugher and the darker the material the heartier I laughed. I think Marc’s always had a soft spot for the guy (I’m guessing it’s almost always a guy) in the audience who is the only one to laugh at one of his uncomfortably truthful observations. Michele would look back and forth between me laughing and Marc performing and she’d afterwards tell me she thought Marc and I might be too alike in worldview. I dunno.

Then 9/11 came along, and swept up in the maelstrom of post-event trauma, our burgeoning friendship took a hiatus. Then a couple of years ago—maybe 2008—I’m at the urinal in the men’s room of the Comedy Cellar. Mid-leak a gravelly voice behind me says, “Is that Bob Fingerman?” I look over my shoulder and it’s Marc. We haven’t seen each other since maybe June or July 2001. I shake off and as I’m washing up—Marc having taken my place at the urinal—we catch up briefly:

Bob: How’ve you been?

Marc: Bad. Bad divorce. You down here or up there?

Bob: I’m up there. Dinner with a friend.

Marc: When I finish my set I’ll stop by.

And he did and we got back on track. None of this comes up in the conversation Marc and I had on the podcast. I don’t want to say any more. This is preamble. Backstory. Since he started the WTF with Marc Maron podcast, Marc has hosted some of the greatest talents in contemporary comedy (not to mention authors, his parents and other interesting characters) and engaged them in something rarely heard these days: bona fide conversation. I was thrilled and honored to be a guest at the Cat Ranch and appear on my favorite podcast. Marc has a genius for keeping it real and real funny. DOWNLOAD AND ENJOY!!!

In the Cat Ranch

It had been raining but when the show was over the sun came out. Hallelujah!

Also filed in | | Comments Off on Bob on WTF with Marc Maron!

Also filed in FROM THE ASHES | | Comments Off on Heeb, Meltcast and a WTF Teaser…

The website Online College has created a “100 Great Blogs for Art Students & Enthusiasts” list and my somewhat redundant (because of this blog) Art Blog Thinger makes the grade. That’s pretty darned cool. Check it out!

Perhaps I’ll try to actually find some of my own, personal, “nephew art,” to which I referred in the post about my uncle’s passing. In the meantime, here’s the B. Kliban cartoon to which I referred. This might be my favorite cartoon of all time. It’s at least in the top five.

As always, click for larger view. Cartoon ©B. Kliban

Also filed in | | Comments Off on NEPHEW ART

Here’s the audio of the interview that The Daily Crosshatch‘s Brian Heater conducted with me at the first annual King Con in Brooklyn. Listen to me ramble. Enjoy the very awkward start, where Brian kicks off by having me talk about another panel I’d recently been on. Forty odd minutes of pure listening pleasure! (Photos courtesy Reid Harris Cooper)

Also filed in Events | | Comments Off on King Con Interview

Graphic NYC Takes on Yours Truly

Ace photographer Seth Kushner and journalist Chris Irving are posting sections of their work in progress, Graphic NYC, a book about the New York-based comics community. They just posted my profile. Take a gander. Here’s Seth’s portrait of me. I think it’s pretty sweet. 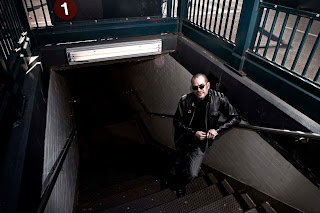 Brian Heater recently interviewed me on his very fine comics blog The Daily Crosshatch. I was a little less guarded than perhaps I should have been (it was more a conversation than the typical Q&A), so I think I come off a bit sourer than I feel these days, but read it and judge for yourselves. All three parts are now up.

Also filed in | | Comments Off on Daily Crosshatch Interview