Also filed in Events, FROM THE ASHES, Public Appearances | | Comments Off on First Ever PARIAH Reading/Signing Event – Brooklyn, NY

Pariah leads the pack in this seasonal zombie roundup in the 11/5/2010 issue of Entertainment Weekly! I also have a story in The Living Dead 2, so hooray!

It’s kind of a big deal to get a starred review from PW, so I’m pretty thrilled.

Also filed in Authors, Press & Praise | | Comments Off on Entertainment Weekly on Me, Pariah & Some of My Favorite Contemporary Horror Writers

PARIAH is FANGORIA’S ‘BOOK OF THE MONTH’ selection!

Fangoria bestows their Book of the Month honor to Pariah! I am thrilled. Back in 2007 they also awarded Bottomfeeder the same honor, so I’m two for two. I loves me some Fango!

Also filed in Press & Praise | | Comments Off on PARIAH is FANGORIA’S ‘BOOK OF THE MONTH’ selection!

Also filed in Authors, zombies | | Comments Off on BEHOLD! MANNA FROM… HELL!!!

The Saga of Pariah

Getting a book published is always a triumph, but in the case of my forthcoming novel, Pariah, it’s extra sweet. The path from its inception to completion to release was long, convoluted and difficult.

Pariah started off, way back in the mid ’90s, as a pitch to Vertigo, DC Comics’ more adult/alternative imprint. Back then, graphic novels were still a novelty, and Vertigo hadn’t really gotten onboard with GN originals. Sure, they collected serial runs of their comics, but one-off books were still in the offing. Back then that had what were called “Prestige format” releases, which were basically 48- to 72-page original books. They were standard comic book size and printed on slightly better paper with paperback cover stock.

A young, freshly promoted editor named Axel Alonso (who had prior been assistant editor to my late friend, Lou Stathis, at Vertigo), wanted to work with me. I put together the proposal for Pariah to be one of these slim releases. The premise was essentially the same as that of the novel, but lacked the complexity the novel afforded. In spite of Alonso’s enthusiasm for it, Vertigo’s group editor rejected Pariah. I never knew the exact reason, but zombies definitely weren’t en vogue in those days.

In the late ’90s, Dark Horse Comics launched Zombie World, its editor one with whom I’d worked several times: Scott Allie. I submitted Pariah and this time the answer was yes—with a caveat. Scott envisioned ZW with a timeline, and Pariah was set in the advanced stage of a zombie pandemic. He requested I write a prequel to Pariah, and thus was born “Winter’s Dregs.” By the time he was ready for me to begin work on scripting Pariah, the series was canceled. Again, zombies weren’t popular at that time.

I set Pariah aside and worked on other projects, but I always wanted to do it. In 2002 I wrote what was to be my first published novel, Bottomfeeder, a gritty, naturalistic, working class take on vampirism. And it hit me: I should write Pariah as my next. I had gotten comfortable writing prose (Bottomfeeder was my first published novel, but not the first I’d written). In fact, I loved it as much, if not more, than doing comics. And the one thing that always bugged me about doing Pariah as a graphic novel (for either Vertigo or Dark Horse) was that I’d have to neuter it. A lot. In comics form couldn’t push the material as hard as I’d want, nor have the luxury of space to flesh it out. Vertigo still hadn’t started pushing the limits in those days, and Dark Horse had a strict PG-13 edict.

My first draft of Pariah pushed too far. It was unremittingly bleak and ugly. It was rejected, though never on the basis of it being poorly written. One rejection was from an editor who “loved this book whole-heartedly” but “the Powers that Be … were too repulsed by the graphic narrative to take it on.” I was both proud and heartbroken by that one. Is it really that harsh? I couldn’t be objective, so I had a horror writer friend of mine read it and he came back with the comment, “it’s unpublishable.” Ouch. Still, I took that as a challenge. I hadn’t come this far with my baby to abandon it.

I thought long and hard about how to address the core complaints without compromising my vision. “It’s too claustrophobic.” Okay, I’ll open it up a little. “It’s too bleak.” The original arc was bleak start/bleak middle/bleak ending. Yeah, that’s a bit unrewarding. “It’s too repulsive.” Even I had to admit, on rereading it, I’d gone too far. And not just with gore. There was some deeply unpleasant material in there. I did a big rewrite and preferred the new draft.

And then good stuff started happening.

Out of the blue, an editor from Thomas Dunne contacted me. He’d read Bottomfeeder, loved it, and wondered if I had anything else in the hopper. I pitched Pariah and he said it sounded great. He read the revised draft and wanted it. It didn’t ultimately find a home at Thomas Dunne, but this editor, a saint named John Schoenfelder, passed it along to Eric Raab, my editor at Tor, who made it happen. With his astute notes an even better draft was finished and here we are. It took a while, but Pariah finally got there. And I couldn’t be happier.

Pariah is out now from Tor Books in trade paperback, hardcover, Kindle and iBook editions.

Take a little tour of the offices of Tor, publisher of my next novel, Pariah (due out this August). Happy anniversary, Tor. I’m excited to be part of the Tor catalog!

Also filed in | | Comments Off on 30th Anniversary of Tor Books!

Some of the warm-ups I did that didn’t cut the mustard and make it into Pariah.

It should come as no surprise to anyone familiar with my work that I am a longtime, died-in-the-wool zombie fanatic.

Recently, I sold my second novel, Pariah, to Tor. I am thrilled (and relieved) beyond belief. It’s a story that I’ve yearned to get out there for many, many years. I first conceived of it as a graphic novel (before my ambitions led me to write the regular kind), back in the mid-’90s. Fortunately (though I didn’t feel that way at the time), it didn’t come to pass in that format. I finally wrote it as a novel and the end result is much better.

The interesting thing is that part of my deal with Tor is to provide the book with some original interior art (I might do the cover, too, but that is pending). My approach is not to do illustrations of any scenes or characters in the book. I prefer to let the readers picture that for themselves. Instead, one of the characters is an artist and he does studies of the undead to pass the time (no more TV or Internet, so one must pass the time doing something). The conceit of the accompanying art will be that these are his drawings. I don’t want any of the art to be typical EC-tinged stuff. The approach is to do sensitive, objective drawings. The zombies didn’t ask to be this way. They’re not evil.

To whet your appetites, here is one of the drawings. I might post some of the rejects here as the months go on, but here’s a sample: 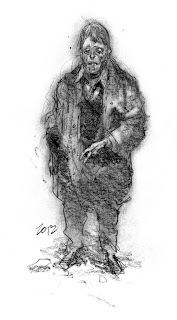